The newest addition to my arsenal; Think Tank Retrospective 20 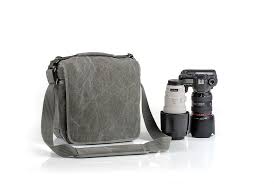 (not my photo, just a  generic image of the bag and a camera which definitely isn't mine!)

When I started this gig, I chose the smallest version of the Lowepro Slingshot to carry my gear around in. Good choice at the time, and I still use it now and then, when I don't need the kitchen sink. For that, I'd take out my second bag - the biggest version of the Slingshot, the 302. My my...thats a heavy bag. Some people have complained about the weight of the empty Retrospective 20 but it is NOTHING compared to my empty Slingshot 302.

As you can see, it's a backpack-style (but only has one strap, it slings diagonally across the back) has a fair few straps and clips and junk, and looks every inch like a camera bag. It screams; "STEAL ME!"
That was my main prerequisite when choosing my next bag - it had to not look quite so much like a bag that might house a few thousand worth of gear. I pretty much decided that when walking through a dark back street in Fortitude Valley at about 11pm after the Simple Plan gig.
The new bag isn't going to be as good for my spine, I am aware of that. I don't plan on trekking for long distances with it. That said, I won't be constantly sling a 6kg+ bag on and off my back. The Slingshot really was a bit of a pain to ge ton and off properly. I always felt a bit like a twit yanking the cords and straps into the right position, always having that one dangling down my butt that I could never figure out where to put...
It is handy for slipping my Macbook Pro into, the Slingshot. That said - so is the Retrospective 20.

However the Slingshots are far better in terms of padding. That's one thing that LowePro do really well - pad the crap out of their bags. In fact I've become used to dumping both of the Slingshots almost anywhere - dropping them from heights on occasion (rarely on purpose!) knowing that the padding offers a lot of protection. Won't be doing that with the Retrospective 20...it  lacks quite significantly in the padding department. I've already shoved some stuff in the bottom to pad it out a bit more.